Hello! Hope everyone’s week was good. We had a short week due to President’s day so we decided to drive up to NH for the weekend. It was great being able to catch up with my family and to get away from the storm that hit Boston. Even though we were away all weekend and were exhausted from driving all day on Monday, we quickly planned a few meals over dinner and then ran to the grocery store before the Bachelor. Is anyone else following this season of the Bachelor?? It’s been craaazy lately. Here are the meals that we came up with for the week:

Sunday: Chili. My mom kindly made us all some turkey and bean chili, which was perfect for the chilly night that we had. It was delicious and filling; we added some chopped avocado to ours and had a small side salad.

Monday: Leftover sweet potatoes. We had made this meal for my family on Saturday and decided to take the leftovers with us back to Boston. Good thing we did because we were both starved and exhausted at 6pm and were glad to be able to just reheat these up.

Tuesday: Salad and veggie burgers. We both ended up working late Tuesday and were too hungry to make any of the meals we had planned so instead we threw together some salads and each made a veggie burger. We also had some pretzels and hummus on the side.

Wednesday: The Almond Eater’s Hawaiian Barbecue Beef Tacos. These were absolutely delicious! We’ve never been the greatest at cooking beef so we’ve been experimenting with it lately and were pleased as to how the beef turned out. 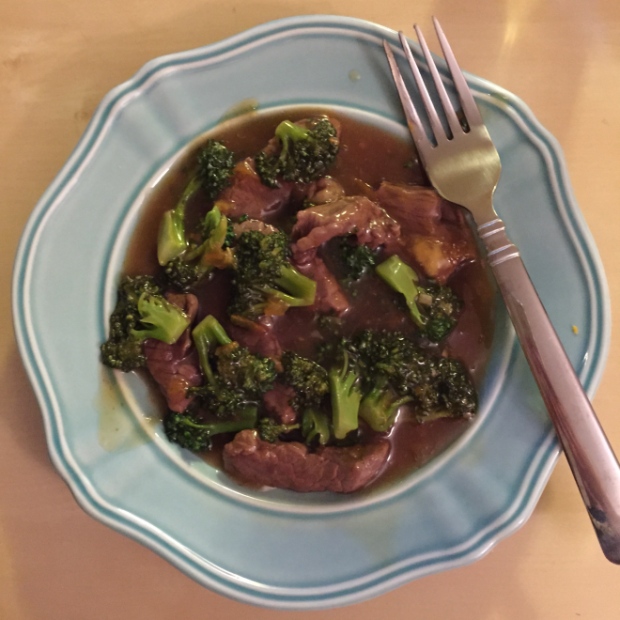 Thursday: Pinch of Yum’s Light Orange Beef and Broccoli. This was also super delicious. We used the rest of the beef we had leftover from the previous night and tried this recipe out, it did not disappoint. Pinch of Yum always has the best recipes.

Friday: Tortellini with veggies. We both had to work late and ended up getting home later than expected, so we decided to just make something simple. We had recently bought this ricotta and spinach tortellini at Trader Joe’s and had some plain red sauce and veggies we mixed in. It was good; simple and easy.

Saturday: Wegman’s prepared food. We were out shopping late and seemed to have “accidentally” planned that we would end up at Wegman’s so we both made a plate of their prepared goodies.